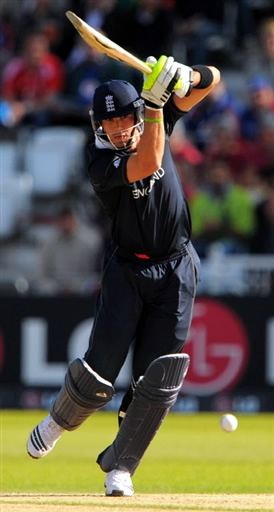 Kevin Pietersen tormented his country of birth with a brutal knock and set up the spinners who choked the South Africans as England completed a comprehensive win and edged closer to a semifinal spot in the T20 World Cup here on Saturday.

Kevin Pietersen struck a 33 ball 52 runs but more than the runs it was his positive attitude which rubbed on to his team-mates who gave an impeccable performance on the field to complete a great win. England spinners Micheal Yardy and Greame Swann bowled a tight eight over spell between them in which they gave 55 runs and grabbed five wickets. But even before the spinners came on, the opening bowlers especially Brensen had pushed South Africans on to the back-foot in the power-play.

Greame Smith struggled to force the ball off the square and Kallis fell early trying to force the pace. His intended lofted drive off Broad ended in the hands of Pietersen at mid-on. Gibbs smacked Brensen for a boundary to break the shackles. But end of the power plays saw a virtual procession of the South African top-order. Gibbs top-edged a sweep off Yardy’s first ball and Ryan Sidebottom took a tumbling catch running backwards.

Smith’s misery ended when he top-edged a sweep off Swannand there were no heroics from Albie Morkel today. Morkel tried to cut a faster ball from Yardy which turned a shade and clipped the top of the off stump. South Africans were in trouble at 50 for four at the end of the ninth over.

AB de Villiers quick on feet was the only player who could have wrested the initiative from the spinners but he departed early as he top-edged another sweep to be caught by Collingwood.

JP Duminy struck a few lusty blows including a massive six off Greame Swann but the run-rate had climbed and he found little help from the other end. South Africa kept losing wickets, Ryan Sidebottom returned for his second spell and scalped three wickets to hasten the end.

Walking in after Botha trapped Lumb plump in front in the first over, Pietersen took the bull by its horns with his aggression. He was cocky and repeatedly waltzed down the pitch to unleash savage pulls to score majority of his runs. A front slap off Dayle Steyn showed his intent as the fast bowler’s first over went for 13 runs. Monie Morkel was wayward and overstepped in his first over. That proved to be costly as Kieswetter was caught off the no ball and he conquered his demons to play a well paced knock. More importantly, Kieswetter added 94 runs for the second wicket with Pietersen, Kieswetter celebrated his reprieve by slamming Langeveldt for a six and two boundaries to take 16 runs off the medium pacer’s second over.

England rattled off 65 runs in the power-plays. Pietersen completed his fifty with his trademark one legged flick to midwicket for a boundary off Steyn. With his medium pacers leaking runs, Smith turned to Botha who delivered for his captain. Pietersen tried to paddle sweep a ball fired down the leg-side and the leading edge was pounced on to by Smith at leg gully.

South Africans were able to peg back England after Pietersen’s dismissal and they fell way short of the projected score when Pietersen was in full cry.