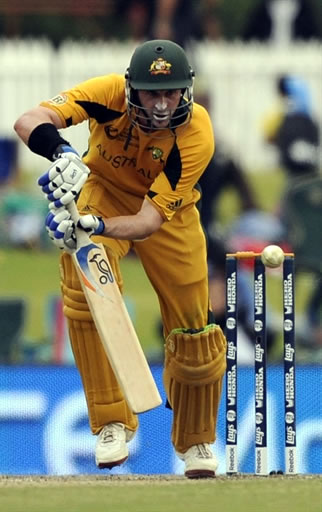 Clarke won the toss and elected to bat first while Bangladeshi skipper admitted that he would have fielded anyway. Australian openers Warner and Watson tried to repeat thier dominant aggressive batting that they displayed in the match agaisnt Pakistan. Some disciplined bowling from the Bangladeshi seamers and the spinners in the Powerplay restricted their attempts. Watson (4, 7b) fell to a pull shot which was gobbled up by Ahmed at fine leg, while Warner's travails against spinners continued. Haddin (6, 9b) promoted up the order did nothing special while Michael Clarke (16, 21b, 1x6) could not find his timing as he fell to a miscued cover-drive.

Wickets tumbled as White (8, 11b) was cleaned up while David Hussey (9, 13b) could not ride his luck as Australia got reduced to 65 for 6. Michael Hussey was joined at the crease by Steven Smith and the two set about rebuilding the innings. The pair added 74 in 7 overs as they took the Australian score to some respectability.

The Bangladeshi chase from the start was doomed as they lost wickets at regular intervals. Shaun Tait set the tone for the innings as he rattled the Bangladeshi batsmen with raw pace. The openers Imrul Kayes and Mohammad Ashraful went for ducks. The innings never really recoverd from those early blows as wickets tumbled. Dirk Nannes and Shaun Tait harrased the batsmen with pace and bounce and the torment never really relented as Ryan Harris continued. Only Shakib (28, 28b, 1x6) and Mushfiqur Rahim (24, 25b, 1x6, 2x4) put up some semblance of fight but in the end it amounted to nothing.