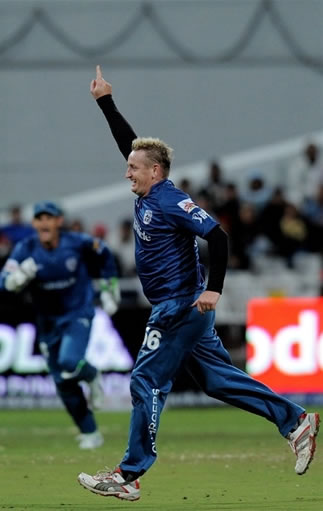 Once again the elements had a say in the match involving Zimbabwe though this time it was the African side to be blamed. The Kiwis decimated the Zimbabwean side to register their second win of the tournament to enter the super eights. Nathan McCullum and Styris starred with the ball as they took three wickets each and that too in a single over. Zimbabwe posted a feeble 84 in 15.4 overs and New Zealand won the match on Duckworth Lewis method after rain intervened.

Daniel Vettori elected to field first after winning the toss keepimg in mind the possible showers later in the game. Zimbabwe needed to win the match by atleast 11 runs to progress into the super eights and they were given some hope by the openers. Taibu and Masakadza kept the Zimbabwean hopes alive as they tackled the Kiwi bowlers with gumption. Taibu in particular was innovative as he moved around in the crease to create scoring opportunities as he found the boundary ropes regularly.

There was a rasping cut, a delicate flick from Taibu's bat as Zimbabwe raced to 36 in 4 overs before disaster struck the African side. Taibu (21, 14b, 3x4) fell as he tried to continue with his attacking game. It was from here that things began to go pear-shape for the Zimbabweans spectacularly. Masakadza (20, 20b, 2x4) fell in attempting a second run and that started the procession of wickets. Blignaut (8, 8b, 1x4) was bowled round the legs by Vettori before McCullum dealt the killer blow in the next over.

McCullum nipped out three wickets with his offbreaks as he foxed Elton Chigumbura (3, 4b) slammed the first ball straight to long-on, Charles Coventry (0, 2b) punched back to the bowler and Craig Ervine (1, 5b) was stumped off the final delivery as Zimbabwe sunk to 63 for 6 after nine overs. Styris repeated the McCullumeffort as he scalped three wickets in four deliveries in the 13th over. Vettori returned to finish off the innings by bowling Ray Price (2, 4b). Zimbabwe posted 84 as they lost all their wickets in 15.4 overs.

New Zealand in reply took their own sweet time as they knew that they had all the time in the world to chase down the target. Though Ryder (2,11b) fell in trying to go for an aggressive shot Brendon McCullum (22, 26b, 2x4) and Martin Guptill (6, 12b) ensured that they did not fall behind the D/L calculations