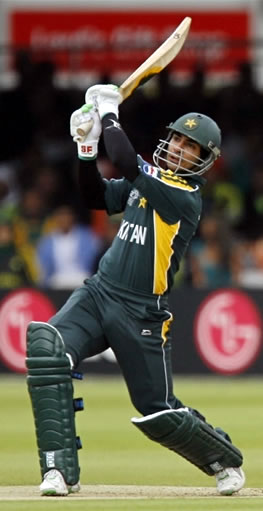 Defending champion Pakistan survived a fight back from Bangladesh before snatching a 21-run win in the T20 World Cup here on Saturday. The script looked familiar when Bangladesh, chasing a formidable 173, slipped to 31 for two by the fifth over. But Mohammed Ashraful (65) and Shakib-ul-Hassan (47) threatened to take the match away from Pakistan with their entertaining 91-run third wicket stand. But Mohammed Sami killed the contest with a two-wicket burst in the 16th over. Sami, after an indifferent first spell, came back to snare Shakib and Mohammedullah in space of four deliveries and it took the wind out of Bangladesh’s sails.

The run-rate mounted and Ashraful tried to manufacture a shot and paid the price for cheekiness. Ashraful tried to shovel Mohammed Aamer over the wicket-keeper and got a faint edge which was taken by Kamran Akmal brilliantly and with it went Bangladesh’s chances.

Till that gaffe, Ashraful made the Pakistan attack look very ordinary. He treated Afridi with disdain and smacked boundaries off medium pacers. Both Ashraful and Shakib scored boundaries at will and when Shakib twice slog swept Hussain for sixes in the 14th over, Pakistan looked down and out. Afridi took a gamble to bring back Sami and the fast bowler delivered for his captain. The mounting run-rate was too much for rest of Bangladesh batsmen

Earlier, Pakistan rode on a brilliant 142-run opening wicket stand between Kamran Akmal (73) and Salman Butt (73) to reach a formidable 172 for three. After surviving a dropped chance, Akmal punished the medium pacers with his trademark square drives and cuts. Mortaza looked rusty and bled runs as Pakistan started at a brisk pace. However, the key to the big partnership was the way both the openers played the spinners. Bangladesh fielded five spinners in their side but none of them were able to stem the flow of runs as both Salman and Akmal used their feet and at times slog swept them to put pressure on the slow bowlers.

Shakib took two quick wickets to stifle the run-rate and Pakistan could only manage 34 runs in their last five overs.