Host Delhi Daredevils were blown away by a clinical performance by Mumbai Indians in the DLF IPL match at the Feroz Shah Kotla Ground here on Wednesday. The host looked like a rudderless ship without its influential captain Gautham Gambhir who pulled his hamstring early in the match and took no further part in it. The loss of Gautham Gambhir mentally psyched out Delhi which was laid low by the collective assault from the Tendulkar, Tiwary and Rayudu. Delhi chasing an imposing 219 for a win was bundled out for 120 and suffered their first defeat in three matches. Mumbai Indians are on a high after notching their second consecutive win. 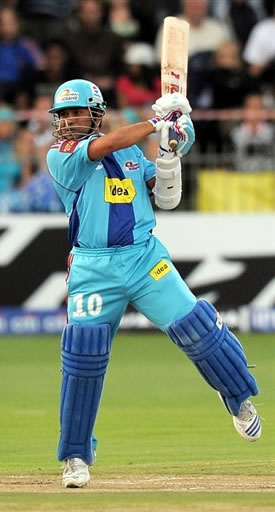 Dilshan and Sehwag started the chase on a high note treating the new ball bowlers with contempt. But Dilshan (17) was undone by a superb slow ball from Malinga. But it was Bravos first over that turned the contest on its head. Sehwags (26) attempt to clear long on ended in a straight forward catch to Rayudu and in the same over AB de Villiers played and the loss of two stalwarts derailed the chase. It was a night in which Tendulkar made all the right calls. His bowling changes clicked as the veteran Jayasuriya prised out Manhas and Harbhajan Singh had the acting captain Dinesh Karthik (16) stumped by wicketkeeper Tare.

Delhis chase had fizzled out and it took a few lusty blows by Maharoof (28) for the homeside to cross hundred. But old fox Jayasuriya foxed Maharoof and had him stumped and with it ended Delhis hopes. The tail didnt put up any resistance and the visitor romped home in style.

Early, Tendulkar was on song and there was nothing the Delhi bowlers could do to trouble the litter master. Tendulkar drove on the up and delicately clipped the ball behind square to garner a flurry of boundaries early. Maharoof bore the early blunt of Tendulkars fury as he scored four boundaries in the bowlers second over. Though Sarabjit Singh induced a false stroke from Tendulkar when his attempted lofted shot fell wide of the fielder and went for a boundary - the little master had the last laugh as he contemptuously lofted the next ball for a huge six. After Jayasuriyas exit, Tare(20) played a few audacious strokes to keep up the tempo. joined and Tendulkar and put the Delhi attack to sword. Tiwarys brute power complimented the delicate strokeplay of Tendulkar as the two added 48 quick runs. Substitute Yogesh Nagar took a good catch to dismiss Tendulkar (63) off Mishras bowling.

Rayuduand Tiwary found themselves in similar territory and needed no license to go after the bowling. Rayuduplayed the big shots off Delhi main bowlers especially Mishra and Nannes. Tiwary had muscled his way to 50 and the two added 71 runs for the fourth wicket to set foundation for a big Mumbai total.