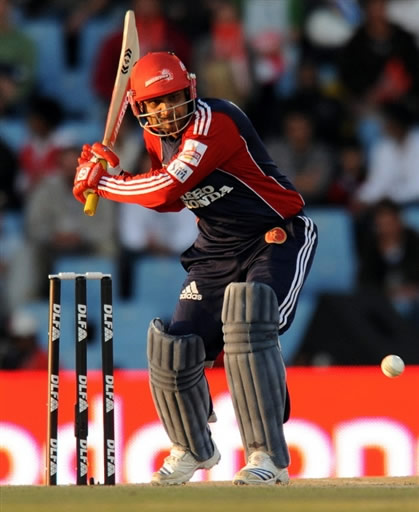 The insects were an irritant for the Royal Rajasthan batsmen. Shewag probably wanted to spend little time on the middle as he swatted the bowlers with contempt. The only blemish in his knock was when Shaun Tait, running backwards, put down a difficult chance at short fine leg as the batsmen slogged Dimitri Mascharanes and got the top edge. It was carnage at the Sardar Patel Stadium and the Rajasthan Royal would have conceded the tie if there was a provision for one as Shewag made a mockery of the field settings and the bowling. After a few streaky start when the ball fell agonizingly close to the square leg fielder, Shewag waded into the Royal attack. Shaun Tait struggled with his length and his fellow medium pacer Munaf Patel was sent to the cleaners by Shewag as he raced to his fifty in just 21 balls. It was the second fastest half-century in the history of IPL after Yusuf Pathan 18 ball fifty against Mumbai Indians last week. In between, Dimitri Mascranhas prised out both Gambhir and Dilshan, but it didn’t deter Shewag who went from strength to strength. Warne held himself back and came on to bowl only in the ninth over but Shewag pulled him contemptuously over midwicket and the first nine overs had yielded 90 runs. Shewag threw it away soon after the time out but by then he had ensured an easy win for his side. Dinesh Karthik (24 not out) and Mithun Minhas (11 not out) took their time to guide Delhi to victory.

Earlier, Rajasthan Royals innings lost its way after a great start. Wicketkeeper Naman Ohja played a short sweet knock punctuated with lofty hits over the infield but he was undone by Amit Mishra’s clever bowling. Smith deprived of strike holed out and Rajasthan, which had rattled up 45 runs in the first four overs, was pushed on to the backfoot. Gambhir’s ploy of introducing the rookie leg spinner Sarabjit Singh was a masterstroke. Sarabjit Singh bamboozled the batsmen in his first two overs. Abhishek Jhunjhunwalla and Paras Dogra steadied the rocking ship but had consumed too many overs for that. Rajasthan was 54 for four at the end of the first strategic time out. Dogra was run-out after figuring in a crucial stand 60-run stand for the fifth wicket with Jhunjhunwalla who opened up in the latter part of his innings. Sarabjit Singh coming for his second spell was punished for 24 runs in two overs as Rajasthan sought some sort of momentum. Abhishek stuck Nannes for two boundaries in the last over to complete his deserved fifty but in the hindsight a total of 141 for six was never going to be enough on an easy paced wicket.