Captain Gautam Gambhir made all the right moves on the field and anchored the chase admirably to guide Delhi Daredevils to a five-wicket win over Kings XI, Punjab in the DLF IPL match at the PCA stadium here on Saturday night. 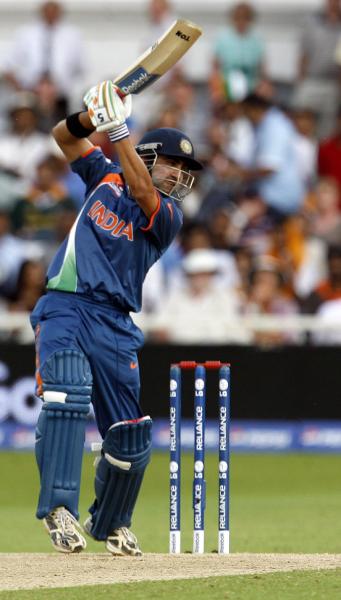 Gautam Gambhir’s workman like innings of 72 off 54 balls held the Delhi innings together after Sreesanth rocked it with two quick wickets in the opening over. Gambhir figured in crucial stands of 35 runs for the third wicket with AB deVilliers (7) and added another 34 runs for the fourth wicket with Dinesh Karthik (20) to put the chase on the right track. He found an able ally in Mithun Minhas (31 not out) at the business end of the chase.

King XI would rue the half-chances it missed in the match. Though the bowling was steady the on field errors were an irritant. AB deVilliers survived a run-out chance early and Irfan Pathan dropped a dolly off Mithun Minhas when the pressure was on the visitors to force the pace. However, Gambhir was unperturbed and played sensibly targeting the area between point and third man for majority of his runs. With Minhas, Gambhir rotated the strike and paced the innings well. He opened up at the latter part of the innings and there were no more comebacks for the Punjab side.

Earlier, the big guns in the Punjab batting line-up failed to fire. Farveez Maharoof snared both captain Sangakkara and Yuvraj Singh in quick succession. While Sangakkara (17) was unlucky as his flick ended in short fine-leg’s hand, Yuvraj played an ugly shot. Jayawardene also fell cheaply without scoring to Sangwan as Punjab lost its way in the first 10 overs. It took a 60-run stand between Bopara (56) and Pathan (21) to inject some life into Punjab’s innings. Ravi Bopara, dropped anchor and complied his half-century. Dilshan’s spin was tempting for Pathan to play his trademark slog over midwicket but the batsman was beaten in the flight and was stumped by the keeper. Mishra too induced the same error from Kaif and also had him stumped by keeper Karthik. When Bopara’s flick off a full toss from Mahesh went straight to Minhas, Punjab had collapsed from a promising score of 104 for four to 116 for eight. The quality of Delhi seamers Nannes and Maharoof was too much for the Punjab tail. However, Sreesanth (15) struck two streaky boundaries to enable his side reach a respectable total.