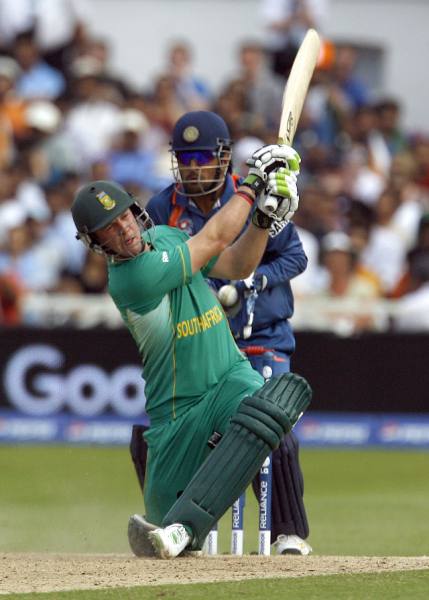 Ahmedabad: India’s vexing problems in the death overs continued as South Africa scored a consolation 90-run victory in the third one-day international cricket match at the Motera stadium on Saturday. The inexperienced bowling flattered to deceive and so too the young guns in the batting line-up.The host chasing an imposing target of 366 fell short by a big margin. Dale Steyn snared three crucial wickets including that of Indian captain MS Dhoni to take the wind out India’s sails during the big chase.

India needed a big start from its make-shift opening pair of Dinesh Karthik and Murali Vijay . But neither of them could blossom after early promise. The loss of two quick wickets pegged the Indians back. A purposeful 95-run stand between Virat Kohli (57) and Rohit Sharma (48) put the chase back in track. But Steyn struck twice in an over dismissing both Dhoni and Kohli in the 28th over to push the Indians on the backfoot. Yousuf Pathan too fell cheaply and though Raina and Jadeja struck a few lusty blows to entertain the crowd the match was firmly in the hands of the visitors.

Earlier, the raw Indian bowling attack leaked 122 runs in the last 10 overs as AB de Villiers (102 not out) and Jacques Kallis (104 not out) send them to the cleaners. The magnificent 173-run unbroken third wicket stand in just under 18 overs between de Villiers and Kallis was the cornerstone of South Africa’s imposing total of 365 for two in 50 overs. The duo consolidated on the start provided by Hashim Alma (87) and Loots Bosman (67) who shared an opening wicket stand of 113 in 16 overs.

Indian new ball bowlers Sreesanth and Tyagi erred in line and presented far too many boundary balls to both batsmen. Bosman was the early aggressor as Amla dropped anchor. Bosman got into his groove by striking Sreesanth for two boundaries in the seventh over. Debutant Mithun too failed to create an impression on the South African openers as skipper Dhoni turned to his spinners. Jadeja commanded respect but Pathan was worked around for runs as South Africans marched imperiously to a big total. Both Bosman and Amla fell trying to up the run-rate. But Indian who thought of pulling things back in the middle overs were baulked by de Villiers and Kallis who eschewed risks and paced their innings magnificently. They took the powerplay at the start of the 40th over and snatched the initiative from the Indians

De Villiers used his feet and struck lusting blows against the seamers who were clueless against his innovative stroke play while Kallis took calculated risks and reached his century by smacking Sreesanth for a towering six. The last five overs of the South African innings produced a huge 78 runs as both batsmen tore into the Indian attack.