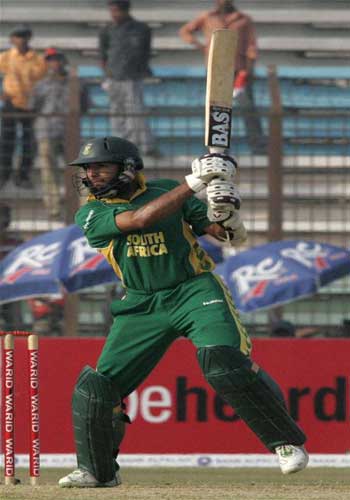 Darren Sammy played a dream innings (58 not out off 20 balls) but couldn’t pull West Indies through as South Africa held their nerve to chalk out a 17-run win in the second one-day international at the Sir Vivian Richards stadium here on Monday.

West Indies, chasing 301 for a win, was down in dumps when Sammy came in and he single handedly turned the match around with his power hitting. But when he brought them to the doorstep of victory there was a typical Windies collapse that left him stranded. The home side needed just 18 runs off two overs when the last man Miller was run-out in the first ball of the 49th over.

Graeme Smith, despite having an awful day on the field when he dropped a catch and had couple of embarrassing misfields, ran-out Miller with a direct hit to redeem himself.

Till Sammy’s cameo, South Africans looked in control. Bravo played his first knock of some substance in this tour to shepherd the Windies chase which in the earlier matches withered after Gayle’s departure. The skipper played a sweet knock to give impetus to the chase but it was new comer Richards who caught the eye with his brave knock. However, misfortune was to strike West Indies as Sarwan left early injured and Pollard was promoted up the order. The big man took his time and along with Bravo rebuild the innings. West Indies took the batting powerplay and Pollard swung his bat around to snatch the momentum for the host. However, Morkel came back to snare Pollard courtesy a superb catch by Botha and when Ramdin ran himself out, the run-rate had climbed beyond 10 per over.

Bravo refused to be cowed down and smote Tsotsobe for a six and a four in the 41st over. Sammy, surviving a dropped chance early, took on South Africa’s best bowler Steyn for some special treatment and struck him for two consecutive sixes to raise the West Indies fight back. Bravo departed in the next over but Sammy continued unfazed. Botha’s figures were spoiled as Sammy struck two more sixes off spinner. But it was in Morkel’s ninth over in which the pendulum swung the West Indies’ way. Sammy launched into the fast bowler and hit him for two fours and a six to take 19 runs off that over. The hosts needed 23 off the next three overs and with Sammy going great guns, a Windies was a possibility. But Both Rampaul and Miller were run-out and South Africa won.

Earlier, Amla continued his fine form and the West Indies bowling lacked penetration on a placid track to trouble him. With his wristy flicks and drives, Amala was severe on bad deliveries and manipulated the field to score his runs. He once again out scored Smith in their opening wicket stand of 83 which laid foundation for a big total. Amla missed his second century on trot when he dismissed for 92. But De Villiers came in and played a sweet knock which prevented the West Indies slow bowlers from taking command. Kallis played the sheet anchor role and later opened up to score briskly. Miller’s cameo took the visitors past 300 which in the end proved to just beyond West Indies’ reach.