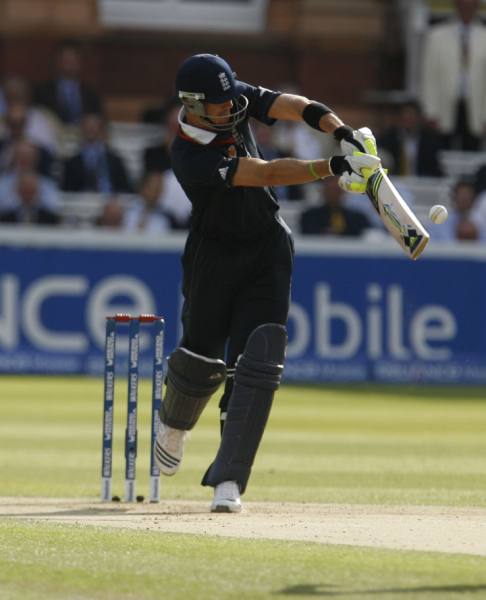 The battle between the oldest rivals had sparked a lot in interest in the cricketing circles and though the odds were stacked heavily in favour of the Australians the English side for once upstaged the form-book. The Australian side was the team to beat as they were unbeaten in the tournament till their run to the final. The English side on the other hand were undone by the weather in their first match against West Indies but then displayed a style of play that had a combination of flair and discipline.

England became the only side not from Asia to lift the cup as the last time winners were India and Pakistan.

Paul Collingwood surprised one and all as he elected to field first after winning the toss. He trusted his bowlers to restrict a strong Australian batting line-up and straightaway he was proven right. The Australian openers had given their side a strong start in the tournament till they failed in the semi-final clash against Pakistan. Today the same failure was repeated.

Ryan Sidebottom got one to bounce a bit more than Shane Watson (2, 3b) expected as the latter edged behind to be caught in the slips after a rebound. Warner (2, 4b) was sold down the river by skipper Michael Clarke while Brad Haddin (1, 2b) was extremely unlucky to be caught behind of his hips. Clarke (27, 27b, 2x4) was scratchy in his stay in the middle and he was brilliantly caught by Collingwood at midwicket of Swann as the Australian innings floundered at 45 for 4 in 9.2 overs.

David Hussey was joined at the crease by the dangerous Cameron White and the onus of shoring up the innings fell on the shoulders of the duo. Cameron White decided that attack was the best way to pull Australia out of the hole and to some extent he succeeded. Sixes and fours flowed from his bat and he was well supported by David Hussey who alos struck his share of six and four. Just when things were looking to get out of control for England as the pair added 50 in 6.2 overs Stuart Broad pulled off a brilliant catch at deep point to dismiss the dangerous White (30, 19b, 1x6, 4x4). The Hussey brothers then got to work immediately as they added 47 in 3.4 overs before David Hussey (59, 54b, 2x6, 2x4) was run-out in his attempt to try and take Australia closer to the 150 run mark. At the end of the 20 overs the Australian side made 147 for the loss of 6 wickets.

England in reply placed their hopes on the opening pair of Lumb and Kieswetter to get them off to a flier. But Tait provided a glimpse of hope to the Australian side with the wicket of Lumb (2, 4b) as the southpaw was dismissed. Pietersen and Kieswetter then set about making sure that the English innigs never got derailed with their aggressive stroke-play. The stroke-making was not laced with risk as the two right-handers knew that the target was within their reach. The pair first familiarised with the Australian bowling unit before taking it head-on.

Kieswetter was the first one to take the attack to the opposition as the openers displayed some excellent attacking range of strokes. Pietersen got off the mark with an emphatic pull through midwicket and he never looked back. The boundaries kept flowing and to top it sixes too came. Kieswetter got to his maiden T20 half-century before Pietersen (47, 31b, 1x6, 4x4) was hoeld out as he tried to close the chase in flourish. When Kieswetter (63, 49b, 2x6, 7x4) grossly misjudged the line of the ball from Johnson to be cleaned up there was a feeling in the air that there would be a twist in the tale.

But an ice cool Collingwood (12 not out, 5b, 1x6, 1x4) and immensely talented Morgan (15, 13b, 1x6) ensured that no heart-break would occur at the end. Collingwood got England across the line with three overs to spare with a brace of boundaries and when the final run was scored it set of delirious celebrations in thye English camp.