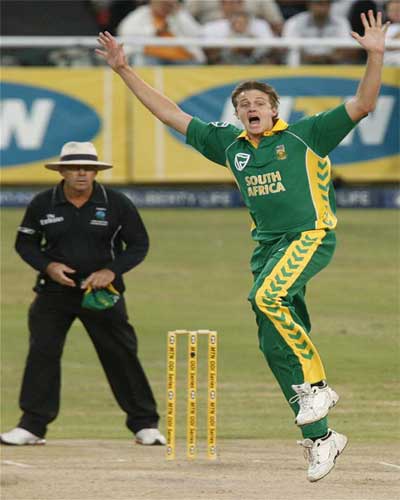 The South African pacemen were on fire and it was rude awakening for the Afghanistan batsmen at international stage as they capitulated without much fight in the crucial T20 World Cup league match here on Wednesday.

The 59-runs comprehensive win handed South Africa a place in the super eight. Mornie Morkel (four for 20) and Charl Langeveldt (three for 12) completed the demolition job after Dale Steyn had softened the Afghani batsmen with his pace and swing. Afghanistan, which did very well in the first part of the match to restrict South Africa to 139 for seven, managed to avoid the ignominy of the lowest T20 international total and was dismissed for 80 runs.

Noor Ali looked like a cat on hot tin roof while facing Steyn who softened him with short stuff and snared the batsman in his first over. Morkel ran through the middle order to leave Afghanistan struggling at 14 for six at the start of the sixth over. The quality and pace of South African bowlers were something that the Afghanistan batsmen couldnt cope with and by the eighth over, they were down to 32 for eight.

However, Mirwais Ashraf and Hamid Hassan found their feet against the innocuous spin of Van der Merwe and Albie Morkel. The duo added 33 runs for the ninth wicket punctuated with lusty hits over the fence.

Earlier, South Africa was unconvincing with the bat against the minnows. The fielding was sharp and Loots Bosman was run out early. But Smith and Kallis played a few forcing shot with Kallis striking two towering sixes as South Africa raced to 45 for one from four overs. But the tempo slackened after the dismissal of Smith who skied a catch of off spinner Mohammed Nabis first over.

Kallis went into his shell and Afghan bowlers especially Hamid Hassan was impressive. Leg spinner Samiullah and Nowroz slipped in a few quite overs as the run-rate dropped. AB de villiers crashed a six off Nowroz to break the shackles but fell soon after that and Hamid scalped both Kallis and Boucher in quick succession to have South Africans reeling at 90 for five. But Duminy and Albie Morkel figured in a 43-run sixth wicket stand that gave respectability to the total. Hamid came to dismiss Duminy courtesy through a fine catch by Mangal and finished with impressive figures of three for 21.