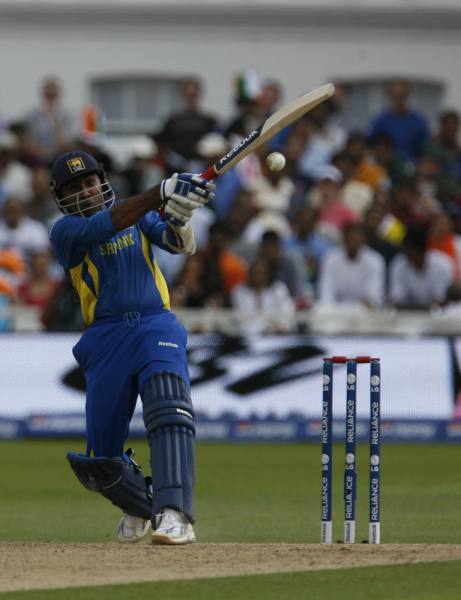 Jayawardene scored a scintillating century to push the Lankan side to a more than competitive score before rain cut short Zimbabwean chase. With this win Sri Lanka retain their chances of getting into the super eights.

Sangakkara won the toss and elected to bat first as he once again trusted his openers to give the team a good start. Dilshan (2, 4b) had endured a horror time with the bat in the previous match and he continued to have a bad tournament. The right-hander faced just three deliveries before he tried to break free by trying to clear the infield but found Mpofu at mid-off. Thissara Perera promoted up the order to give a boost to the flagging run-rate was clearly out of his depth.

The Zimbabwean bowlers bowled a stump to stump line as Perera found it difficult to get the ball off the square while in-form Jayawardene was in a sublime touch. The cut shots were precise while the pull shots had a look of elegance rather than a brute thump. The elegant right-hander made batting look ridiculously easy as he collected boundaries at regular intervals. Perera (24, 19b, 2x6, 1x4) was visibly running out of ideas as to how to counter-attack the spinners. Though he cleared the boundary ropes twice the pressure built by the Zimbabwean bowlers brought about his downfall. Sangakkara (3, 7b) failed to get going as he hit a long-hop from Cremer straight into the hands of Price at short fine-leg. Inexperience and impatience got better of Chandimal (9, 8b, 1x6) as he tried to clear the boundary ropes more than once but could only find a fielder as the Lankans slumped.

Angelo Mathews (3, 6b) did nothing of note but that did not stop Mahela Jayawardene's glorious march towards his maiden T20 century. Sri Lanka at the end of their 20 overs scored 173 for the loss of seven wickets.

Zimbabwe in reply faced one over before rain intervened. The Zimbabwean score at that time was 4 for no loss. After the resumption the target for Zimbabwe was changed to 104 in 11 overs. Five overs constitute a match in T20 International and the Lankan skipper very nearly messed it up. With rain in the air Sangakkara handed the ball to Malinga and though the paceman bowled an excellent over it ate up crucial minutes. Realising his folly he went back to his spinners who did well to keep the Zimbabwean batsmen quiet.