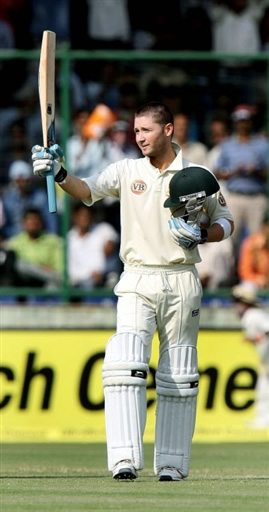 Though the hosts took control of the early proceedings the Australian side led by Clarke's fluent century wrested the control from the New Zealanders to finish the day at 316 for 4. Clarke was unbeaten on 100 while North supported him with a crucial unbeaten 52.

Ponting won the toss and it was a no-brainer as he elected to bat first. Hughes (20, 24b, 4x4) and Katich (79, 191b, 1x6, 8x4) gave the visitors an aggressive start before debutant Brett Arnel removed the former. Ponting (41, 86b, 5x4) then joined Katich as the two then put to sword the Kiwi bowling attack before Ponting was run-out due to some poor calling between him and Katich. Hussey (4, 11b, 1x4) did not stay long as Martin removed the southpaw before he could cause any damage of great significance. Katich was looking dangerous before his tendency to shuffle across the line brought about his downfall as he was trapped leg before by a straighter one from Martin.