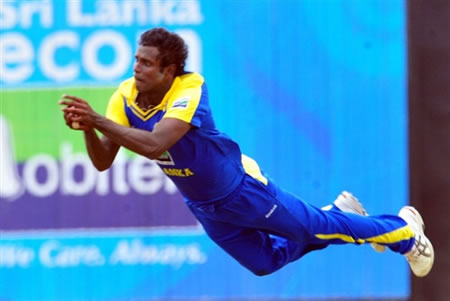 Kolkata Knight Riders overcame a terrible start and a cameo knock from rusty Adam Gilchrist to beat defending champion Deccan Chargers by 11 runs in the opening match of the DLF IPL at the DY Patil stadium here on Friday.

Deccan Charges messed up its chase as Gilchrist who was dropped twice VVS Laxman, Andrew Symonds, Herschele Gibbs and Rohit Sharma threw their wickets away to rash strokes.

Deccan lost the plot in the back 10 overs in which it lost wickets in a hurry and was also pegged back by inspired Kolkata bowling. Ganguly was spot on with his decisions and cleverly rotated his bowlers. Though Gilchrist struggled to time the ball, he was lucky and his shots kept evading fielders. Gilchrist, who was first dropped on two by Hodge, punished the Kolkata bowlers for the mistake and played with his trademark aggression. The 50 for the opening wicket was made in quick time and when appeared that the Chargers would cruise to the target, Laxman got out to Murali Karthik playing an ugly slog. But Gilchrist along with Gibbs, who also was rusty, took the score to 99 before Gilchrist pulled Hodge straight to Tiwary’s throat and the rot set in. In the next over Gibbs holed out and was caught in the deep and the Kolkatans were right back into the match.

Ganguly was astute and his bowlers and fielders responded admirably. The runs dried up and Symonds played another poor shot much to the chagrin of his supporters. Rohit Sharma’s ungainly tennis ball smash to a slow bouncer from Angelo Mathews ended in a tame catch and it summed up the irresponsible strokeplay of the Deccan batsmen. With Rohit exit, Deccan's hopes ended. Though Anirudh struck a few meaty blows, Shukla snared him at a crucial time. It was a tall order for Suman and Jaskaran Singh to score 17 runs off Ishanth Sharma’s final over. In the end they could only mange six runs.

Earlier, Kolkata started disastrously. A vintage Vass dismissed both Tiwary and Ganguly in his opening over to give Chargers a dream start. Cheteshwar Pujara and Hodge fell in quick succession to have KKR struggling at 31 for four. But Angelo Mathews, who top-edged the first ball for a six, played a brilliant counter-attacking innings and along with Owais Shah added an unbroken 130 runs for the fourth wicket. The two were circumspect at the start of their innings but opened up with some clean hits. The back 10 overs for KKR produced a staggering 104 runs 68 came off the last five as both Mathews and Shah launched a breathtaking assault on the Deccan bowlers and spoiled their figures.