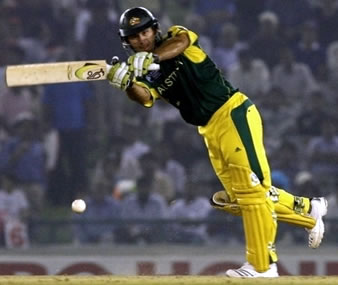 The Australian side kept their cool as the chase headed to a close finish and in the end retained the Chappell-Hadlee Trophy that they won last February. Chasing 200 in 34 overs to gain an unassailable lead the Australian side guided by White's cool-headed unbeaten 50 chased down the target with 11 balls to spare.

Earlier Ponting won the toss and elected to field first once again entrusting his bowlers with the job of restricting the Kiwi batsmen. But this time openers McCullum (61, 75b, 4x6, 3x4) and Guptill (30, 22b, 5x4) were prepared to take on the Australian bowlers. The pair added 63 in 7.4 overs to give the Kiwis a splendid opening start but unfortunately for the home side that was the only positive sign during their batting display. Barring McCullum who crossed the fifty run mark nobody else showed the necessary application to create any sort of ruffle in the Australian camp.

The wickets fell regularly with Johnson, Watson and Hopes claiming two wickets each while Hauritz was rewarded with three wickets which included the valuable scalp of McCullum. Daryl Tuffey (34, 17b, 3x6, 1x4) wielded the long handle towards the end but New Zealand once again committed the cardinal sin of not batting out the full fifty overs. The hosts were all out for 238 in 44.1 overs.

The Australian reply was delayed due to sharp showers and once the play resumed the Duckworth/Lewis method came into play. Australia needed 200 in 34 overs and Bond gave the hosts the perfect start. Last match centurion Haddin (0, 1b) was caught at the slips of a perfect out-swinger from Bond but Ponting and Watson combined to snuff-out any hopes.