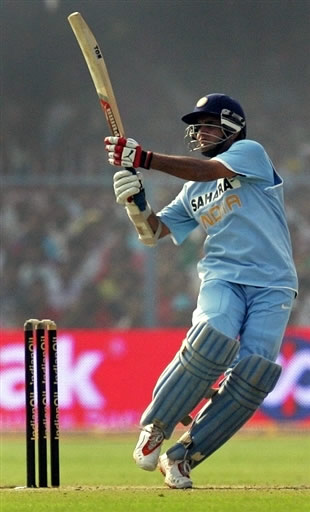 Ahmedabad: Bengal remained the bridesmaid for the third successive year as Tamil Nadu retained the Vijay Hazare Trophy in a high scoring final at the Sardar Patel stadium in Motera on Tuesday.

Tamil Nadu notched up a 29-run win on a belter of a pitch at Motera that saw 729 runs being scored in 100 overs. Dinesh Karthik won an important toss and had no hesitation in batting first. His decision was vindicated in the forceful opening wicket stand of 85 by S Anirudha and Murali Vijay. There was little respite for Bengal bowlers as Abhinav Mukund joined Murali and the duo merry against an ordinary Bengal attack to add 120 runs for the second wicket. Murali helped himself to a century (103) and his dismissal brought further trouble for Bengal in form of Dinesh Karthik. The Tamil Nadu skipper Karthik carried the rich vein of form he displayed against the South Africans into this match. He flayed the innocuous attack to score an entertaining knock of 88 off just 47 balls. Karthiks impetuous knock in the death overs took the match away from Bengals grasp as the last 11 overs produced a staggering 130 runs.

Bengal started its chase disastrously losing Arindam Das cheaply. However, Goswami (81) and Ganguly (74) added 120 runs for the second wicket to put the innings in track. But Gangulys dismissal through a fine catch by Sathish triggered a collapse as Bengal lost far too many wickets in the middle overs.The writing was on the wall when Bengal lost Saha cheaply in the 38th over. But A.P Mujumdar played a sweet innings of 66 and tore into the tiring attack to delay the inevitable. The tail also wagged but the target was too stiff for it as Tamil Nadu came out as deserving winners.