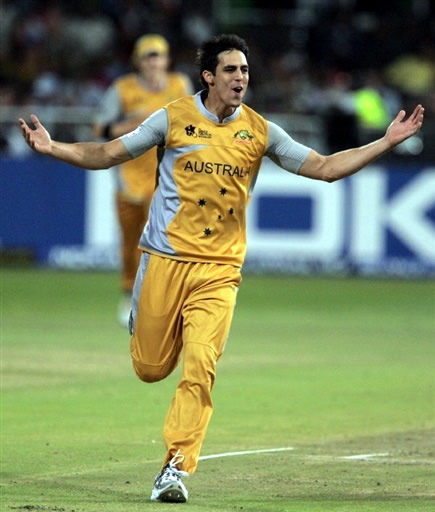 Australia, which has not lost a match at home this summer, continued its rich vein of form overseas with another domineering show in Wellington. Man-of-the-match Micheal Johnson (three for 19) wrecked the New Zealand innings with sustained spell of hostility. The host was bundled out for paltry 118, a total which was inadequate to test the inform team. David Hussey, making a comeback into the T20 squad, shepherded the chase after Australia lost early wickets.

Cameos from David Warner and Shane Watson saw Australia starting the chase in a hurry but the loss of three quick wickets pushed them on the backfoot. A resourceful 67-run stand between David Hussey (46) and captain Michael Clarke (18 not out) steadied the innings. The frenzied opening wicket stand between Warner and Watson, during which they clobbered 38 runs in three overs, had provided ideal platform for Hussey and Clark to eschew the risks. Cameron White ended the match in style with a straight six off Nathan McCullum.

Earlier, nothing went right for New Zealand which elected to bat after winning the toss. Shaun Tait bowling in excess of 150 kmph, harried the Kiwi openers with his pace and movement. Tait snared Brendon McCullum early and with it went the New Zealand hopes of putting up a fighting total. Dirk Nannes, working up good pace, provided little respite at the other end and it was only a matter of time for the Kiwis to crack. The innings was in disarray once Johnson found his rhythm. It took a brave knock of 43 from James Franklin and his 50-run sixth wicket stand with Hopkins to enable the host to cross 100. But Hopkins’ departure triggered another collapse as New Zealand lost the last six wickets for just 14 runs. The target of 119 was never going to test the world’s best team and in the end the Australians cantered home with four overs to spare.