SACHIN TENDULKAR – 200 not out
by Jinu Sabastian
DateLine: 26th February 2010 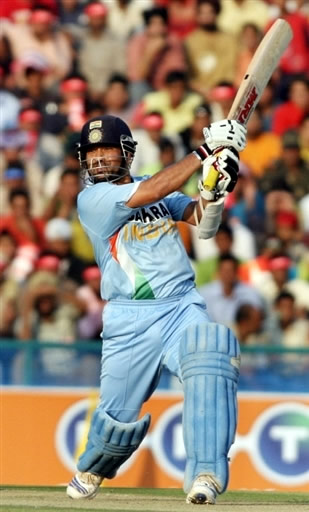 After the conclusion of a heart-stopping Ashes Test at Edgbaston where England snatched a narrow two run victory, noted columnist Peter Roebuck wrote that there comes a moment in sports where dictionary does not contain words to describe the nature of the event on the field. On February 24 2010, one such event occurred on the grounds of Captain Roop Singh Stadium, Gwalior as Sachin Tendulkar astonishingly breached the 200 run mark after 2961 matches in one-day history. This feat is from a man who had failed to open his account after his first three one-dayers.

Saeed Anwar of Pakistan and Charles Coventry of Zimbabwe got stuck at 194 but the champion right-hander from Mumbai was destined to reach the 200 run mark first. Twice in 2009 Tendulkar threatened to get past the then record 194 and post 200. Once in Christchurch against an awe-struck New Zealand side who did not know what had hit them. Tendulkar was in such pulverizing mood that only a well-directed short delivery from Ian O’ Brian, which struck him on his abdomen, forcing him to retire on 163 as he was unable to carry on. Then in Hyderabad against Australia as Tendulkar single-handedly took the wheels of the chase that was derailed before a slower delivery from McKay was lamely chipped to White at short fine-leg to terminate his innings at 179.

While Saeed Anwar scored his elegant and brutalizing 194 against a toothless Indian bowling attack in 1997, Charles Coventry made merry against a Bangladeshi side that was out of their league. Sachin Tendulkar was up against a bowling attack that was spearheaded by one of the finest pace merchant of contemporary times and well oiled support bowlers. But the right-hander was in a bellicose mood right from ball number one. The South African pacemen bounced him, threw in the yorkers and then some well-disguised slower deliveries but Tendulkar was upto the task as he literally met fire with fire. It was a flawless innings as Tendulkar employed almost all the shots in his repository: the cuts, pulls, straight drives, sweep shots, the paddle sweeps, dabs and the nudges to reach the magical 200 run mark that the famed South African bowling attack was left searching for answers.

The reaction from the man after reaching 195 and then 200 told the character of the man itself. Never has Tendulkar been seen indulging in wild celebrations, gesticulating in furious bat waving antics or so. If any body had questioned his place in the Indian side he would simply reply with his performance with the bat. After reaching 195 he simply waved his bat around acknowledging the cheers of the crowd and his team-mates. After reaching the 200 run mark he employed the stance that has now become a trademark of his. An erect poise with head slightly tilted back, satisfied smile on his lips, hands held aloft with helmet in the right hand and bat in his left hand savouring the moment for three seconds before accepting the congratulations from his partner and the opposition team.

True the pitch was flat and the boundaries short but to stay at the crease right from the first ball of the innings to the last ball facing 147 balls to score that magical 200 was something to be appreciated. One false shot or one moment of lapse in concentration would have terminated the innings but the gods of cricket if any was smiling and showering their blessings on the little man to achieve the feat.

Tendulkar has faced wide range of bowlers right from his debut, through the nineties and 2000s till now. He had to content with the sorceries of Wasim Akram, Warne, Murali, pace of Waqar, Akthar, Donald, Brett Lee and strangulating accuracy of McGrath, Gillespie, Pollock, Ambrose and Walsh. On many occasions the bowlers had triumphed over but Tendulkar did not let it affect his mind and bounced back on several occasions.

For the last three years or so Tendulkar has been in irresistible form as he has been reeling off centuries with alarming consistency. If noted carefully it was after the disastrous 2007 World Cup that Tendulkar is in such belligerent mood. There were many who questioned his place in the side with Ian Chappell leading the way. The former Australian skipper was harsh in his judgment of Tendulkar’s waning reflexes and advised him to retire like Lara. Many armchair critics too began to put up signs saying that it was the end of the road for Tendulkar. Many, it seemed, forgot that Tendulkar was after all a human.

After the disastrous campaign he returned back to his favourite opening position and once again he found his lost mojo. Though he was consistent with his scoring 2007, Tendulkar on consistent basis was being dismissed in nineties with twice on 99. The pattern was evident in both Tests and one-dayers and the naysayers from all over the world began to question his nerves. But at the advent of 2008 Tendulkar was back to scoring centuries and he made no secret of his ambition as to have a world cup in his trophy cabinet thus setting his sights on 2011 World Cup. Tendulkar once again had to suffer a run of bad form as he was confronted with the spin twins of Sri Lanka as Mendis and Muralitharan reduced the great batsman to mere mortal with some unplayable balls. But true to his self he returned back to form to seal some memorable wins and series for India.

As time passed he began to fulfill things that many thought was beyond him. There were many saying that he has not played till date a winning knock in the second innings to lead India to win in Test like a Lara, Steve Waugh or Gilchrist. Tendulkar answered those critics by scoring a magical unbeaten 103 in Chennai against England to disprove his ever-growing critics. It can be assumed that he must have set his sights on Lara’s 400 in Tests but would keep it close to his heart the ambition to overhaul the record score.

To witness Tendulkar surviving for more that 20 years in international circuit and on the way being the victims of injury, poor form, below mediocre team-mates, poor stints with captaincy has not let those factors to diminish his love for the game is some thing that inspires awe and respect for the ageless man from Mumbai.